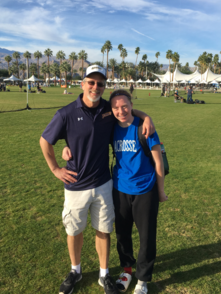 Avi got involved in girl’s lacrosse when his then 4th grader wanted to play; on the condition, he was involved.  With not many coaches available, he signed up and started coaching for the Walnut Creek Lacrosse Club in 2011. Avi has been certified by US Lacrosse for Level 1, 2, and 3, and has coached at various levels during the spring and summer seasons.

His biggest regret – not getting involved sooner.

Avi lives in Walnut Creek with his wife of twenty-six years and his children. In whatever time is left in the week, he enjoys gardening, riding his motorcycle, and volunteering for his daughter's other sports.

Coach Phil with his daughter Mya

In 2015, he implemented the 4Core© program with his youth lacrosse team, where half the team was first-year players.  To his surprise, he saw the skills of both his first year and returning players improve dramatically, ultimately resulting in an undefeated season. In addition to team victories, the program enabled the first year players to quickly play an impact role and led to increased enjoyment of the game for all team members. The desire to share the approach with other lacrosse players in the area led him to start the 4Core© Lacrosse Academy and the 4Core© Club Program.

Phil currently lives in Walnut Creek with his wife of twenty-one years and his four children. In his free time, Phil enjoys spending time with his family, woodworking, and playing golf. 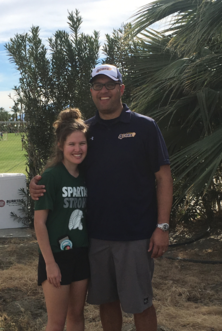 Coach Avi with his daughter Rylee